There are many attributes, we share as humans, that require us to live our lives the same as every other person; we must eat, we need sleep, we like companionship, and most of us like to belong to a sense of community.

But, by trying to seek acceptance within a community, how much of our day to day decisions are governed, not by our own testament, but by an attempt to fit in with those around us? In other words, how often do we make decisions based on what others might think, as opposed to what we think.

I wonder if Ghandi ever returned back from a day of non-violent civil disobedience, to peel off his sweaty, hand sewn khadi, before jumping into a pair of Levi’s, and aiming the remote at his 8 inch black and white, to watch the Sunday sport channel – “Thank God! Now I can be me, for a while.”

Living life, in a way to fit in with our mainstream contemporaries, is what the late British philosopher, Bertrand Russell, calls The Herd Mentality – But, what exactly does that mean for those of us, who decide to move at a different pace? To downshift, to travel, or seek an alternative lifestyle?

Is it possible to survive in today’s world by being who you really are, and not succumbing to the expectations of those around you; the new car, the bigger house, this season’s clothes..

After all, the fear of being different can create a strong anchor to remain loyal to the status quo.

When we first talked about travelling, schooling our kids on the road, and leaving steady jobs behind in a recession, those in our social network would ask: What if you don’t get employment again? What about saving for your retirement? What if you can’t get back on the housing ladder? OMG, how will your kids socialise? And double OMG, what if you end up with no friends, on the entire planet? 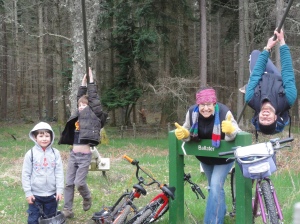 The truth was, we didn’t know the answers to those and many other questions. Or indeed, what the future would hold. Back then, we didn’t know that we’d meet other like minded people form N.Z, Austria, France, Wales and Scotland.

Ironic really, given that we’re perhaps the scruffiest family in this part of the world. Not that we mind.