And on the seventh day, the Vehicle Testing New Zealand man stood back and marveled at the creation made in satisfying all necessary legal requirements for our trip ahead.

Rewind, one week ago, almost to the hour.

It was an agreeable beginning, small talk with the receptionist, idle chatter with other customers. All whilst our mobile bach was receiving her six monthly health check.

Everyone seemed happy enough. Even now I recall the boys marveling at the camper being lifted up while mechanical gynaecologists underneath inspected her less visual parts to ensure all was fit, well and firmly in place.

But then, what was that? A slight shake of the mechanics head while viewing the towbar? Followed by;

“Isn’t that the serial number for the City Lego fire truck with the rescue boat?”  I mused.

I could feel the joke shifting back towards me. “But it’s been on the camper for thirteen years” I protested.  “How much will that set me back?”

In that moment, I experienced what athletes refer to as time dilation. A state characterized by the perceived slowing of time, narrowing of vision, increased heart rate, increased breathing and for me right at that point, a slight unsteadiness in the legs.

“Six hundred bucks! Don’t you realize this means our kids won’t get any food now for two weeks?”

I tried to offer him a free surfing lesson as a bribe for the Certificate of Fitness, but by that stage it was a fait accompli. My walk to our mobile home resembled that of an opening batsmen trudging back to the pavilion after a first ball duck. Head bowed, shoulders hunched. I felt skittled.

It’s funny, the illusion of control. The belief or perhaps expectation that we’re in charge of what goes on, and how we think we can influence the future in some way? At that time, the future (at least for the next seven days) was beyond my control and now lay in the provident lap of some structural engineering guru.

Yet here we were, faced, or rather forced to spend the next 168 hours staying in a town we’d hoped to leave after four. It was only later in the evening that I began to see the ridiculousness of my reaction to the afternoon’s events. So what if we had to stay in Thames for a week! There were no jobs to get back to and no lawns that needed mowing. After all, it could have been worse. I mean what if this had happened in Kaitaia or Invercargill?

Ironically, the days raced by. With thanks to our unscheduled stop, we enjoyed evening swims at the end of unmarked bush tracks, in the many waterholes of the KauaerangaValley. As well as feasting on wild blackberries from the roadside and other culinary treats available at nearby markets we otherwise would have missed. 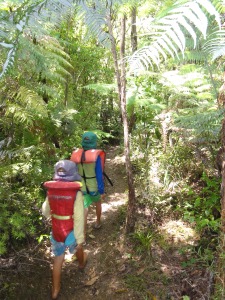 In fact, almost before realizing, we’d come full circle. The tow bar was fixed, we were legal again and before us lay a lazy afternoon drive ahead.

Only this time we didn’t really care where we stopped. You miss out on too much when you stick to a plan. 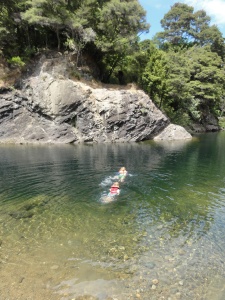