On the instructions of a specialist, our attempts to resuscitate proceeded with fumbling fingers disconnecting the leads, before we placed the body upside down on its head to reverse a suspected air embolus in the cooling system.

Despite our best efforts, these endeavours were in vain..

After ninety minutes of trying to save its life, our 23 year old Lehel fridge freezer was finally pronounced dead at 12:03 on the 17th January  – three days into a month long stay in a remote northern part of the Coromandel peninsular.

As the sun reached its zenith in a cloudless sky, the weather outside our motorhome became uncomfortable, whilst inside, the smell of decaying perishables made it unbearable.

The frozen vegetables stored in the freezer to stave off bouts of scurvy by week three, had now turned to a smelly pulpy bag of mush. Blocks of chocolate for late night cravings after the kids were asleep had melted to ruler depth pieces of goo with the inner foil now part of the treat.

This was unexpected. This was a problem. This was causing a pungent smell to emanate from such a small and humble abode.

On the flip side, for its wake, we feasted on huge dollops of greek yoghurt, several cartons of cashew flavoured hummus and runny ice-cream.

It did however spell the end of the cold beer. Since then, I’ve found out that the only thing worse than cheap beer, is cheap warm beer, which in turn,  led to all social engagements with fellow campers being cancelled after word spread that I’d tried to offer a neighbour a warm can of Rheineck.

It was all getting a bit theatrical, but still, as they say in the thespian industry, the ‘show must go on’. And with a band of great weather sitting overhead, and the nearest whiteware agent five hours away, it seemed this was an appliance we would have to live without for a while.

Over the following weeks and thanks to several emergency supplies of powdered milk, tinned fruit and a seemingly endless supply of freshly caught fish from Tangaroa’s chillie bin, we managed to sustain a standard of living that kept our bodies ticking over whilst we lapped up the serene environment and weather during the first month of 2013.

If only it had been that easy to keep the fridge alive. 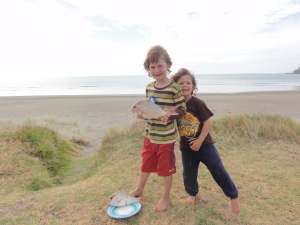