Stooping down the four inches needed to break into her personal space, I looked my companion in the eye and in a moment of (what I thought to be) mutual connectedness, made another proposition. “Let’s take a stroll together. It’ll be fun…” I said. Holding our stare until she blinked.

It was a thoughtful blink.
Perhaps it was a sign she understood. Then again, maybe I was reading too much into a relationship that was never meant to be?
“If you need more time, I’ll wait?” I suggested .
But on this occasion, not even time could bridge the chasm between us. No matter how hard I tried…… I just couldn’t get the donkey to walk.

So I left her. I could tell she was upset. I was hurting too. I could see it in the way she randomly twitched her ears. I doubt it had anything to do with the flies landing on top of her head. It looked like a sad ear twitch from where I stood.
But then, as they say in this business, it’s better to have tried ploughing with a donkey and lost, than not to have ploughed with a donkey at all.

But not all was lost.
Having swapped from the front animal end to the back iron end of our black beauty, she promptly took the same message from my wife and before the day was over, our work was done. The field was finished and prepped for a new Autumn crop of strawberries.

“Why work with donkeys?” We asked our latest farm host as we caught up over a glass of Bordeaux red later that evening. The response, indicated an emerging awareness of rising oil prices along with speculation we’re on the other side of the peak oil hyperbole. Ironically, the idea of seeking out alternative solutions was seen more as an opportunity than a problem. Which in this case, included the re-introduction and learning of older farming practices.
Infact, within a neighbouring region, courses are even offered teaching the age old method of producing with animals. A collective idea of looking back, to move forwards. 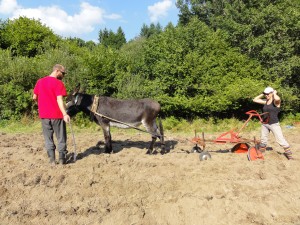 Yet, irrespective of whatever reasons or philosophies that prompt farmers to practice this way, our two weeks that followed merged into a tranquil, nostalgic and enriching experience. The work was completed without the single combustion of a tractor engine and the donkey and I managed to put our differences aside.
I promised not to make a fuss out of her big wiggling ears and in return she happily batted those eyelids when walking next to me..